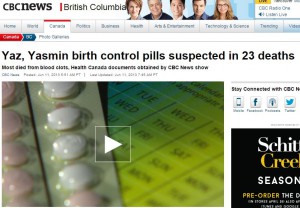 At least 23 Canadian women who were taking two of the most commonly prescribed birth control pills in the world have died, CBC News has learned.

According to documents obtained from Health Canada, doctors and pharmacists say Yaz and Yasmin are suspected in the deaths of the women, who mostly died suddenly from blood clots.

One of the women, 18-year-old Miranda Scott, was working out on an elliptical machine at the Okanagan gym at the University of British Columbia when she collapsed and died three years ago, said her mother, Chip McClaughry, who is involved in a class-action lawsuit against Bayer, the maker of the birth-control pills.

This website uses cookies to improve your experience while you navigate through the website. Out of these, the cookies that are categorized as necessary are stored on your browser as they are essential for the working of basic functionalities of the website. We also use third-party cookies that help us analyze and understand how you use this website. These cookies will be stored in your browser only with your consent. You also have the option to opt-out of these cookies. But opting out of some of these cookies may affect your browsing experience.
Necessary immer aktiv
Necessary cookies are absolutely essential for the website to function properly. This category only includes cookies that ensures basic functionalities and security features of the website. These cookies do not store any personal information.
Non-necessary
Any cookies that may not be particularly necessary for the website to function and is used specifically to collect user personal data via analytics, ads, other embedded contents are termed as non-necessary cookies. It is mandatory to procure user consent prior to running these cookies on your website.
SPEICHERN & AKZEPTIEREN